Home Welcome to Shaftsbury Article: Did You Know? 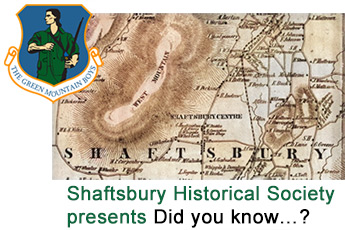 You might say that Benning Wentworth, Governor of New Hampshire, was the father of Town of Shaftsbury. After all Shaftsbury came into existence on August 20, 1761, when Governor Wentworth granted 66 shares of 23,000 acres of land for the new Township (the original grant is still kept in the Town Clerk's Office). But as the town's "father," Governor Wentworth's parenting skills were less than stellar. Even before coming into office, he was notorious at Harvard for running up debts and less savory activities. Having come from a wealthy, well placed family, his

somewhat colorful reputation was already known to Governor Belcher of Massachusetts, who described him as a "rascal" and "contemptable simpleton." Nevertheless, when King George II approved carving out the New Hampshire colony from his Massachusetts lands, Wentworth was chosen to be governor. But the appointment was more a financial decision, than based on any governing capabilities. It seems Wentworth had incurred so much debt from powerful people in London, that it was agreed the only way he could repay such debt was to take as much profit for himself from this new position to cover his obligations. And to that end Governor Wentworth was highly adept.

The newly minted Governor found that if he issued a charter as a New Hampshire Grant for large tracks of land, but first bought the most desirable parts for himself, he could make a substantial profit on every grant by selling his property after settlement began. Adding these monies with the fee he received for granting the charter, plus the rents he would receive, the Governor had a very nice business going. So, between 1749 and 1764, Wentworth issued New Hampshire Grants for 129 towns. The only real problem that occurred (and one that didn't impact him personally) was identifying the western border of his New Hampshire colony. The southern border clearly lay along the Massachusetts line, but nothing clearly designated a western boundary. He wrote the Governor of New York asking his position regarding New York's eastern border. But having asked the question, he didn't feel the need to wait for an answer, and continued his cash cow business with further land grants, even though they occasionally overlapped grants already issued by the Governor of New York. And since the New Hampshire grant price was less than New York's for the same land, Wentworth was doing a proverbial "land rush" business, as speculators like brothers Ethan and Ira Allen families quickly bought up grants.

The boundaries of Shaftsbury's 1761 Charter generally included the land between Bennington to the south, Arlington to the north , the Green mountains to the east and the Taconics to the west. As early as 1762, the first proprietors meeting of Shaftsbury landowners took place. And records reflect that both the Allen and Wentworth families were well invested in the town. Owners included Joseph Allen, Isaac Allen, Nathanial Allen , Josiah Allen, Benning Wentworth, John Wentworth and Samuel Wentworth, each having various Shaftsbury landholdings.

Clearly, New York was not happy about the situation since disputes became commonplace. And where conflicts over land rights occurred, violence occasionally followed, as Shaftsbury found out.

Perhaps the most famous and most vocal of the local, so-called land grant "rioters" was the future Revolutionary war hero Ethan Allen. He was a man who refused to accept defeat, in war or in legal disputes. Thus, when a New York court would not recognize his rights under a New Hampshire Grant to certain lands, allegedly along West Mountain Road, Shaftsbury, he organized an unofficial militia, dubbing them the "Green Mountain Boys." Their mission was to fight for their rights, but not against the Crown, rather against their New York neighbors.

The most well known of these conflicts occurred in 1772. In that case, John Monro, a settler living in Shaftsbury Hollow, had claimed certain lands under a New York Grant. But then he got into a land dispute with a leader of the Green Mountain Boys, Remember Baker of Arlington. There was a reward offered in New York for Baker as a "rioter." Monro clearly thought he could kill two birds with one stone. If he kidnapped Baker and brought him back to New York, he could get the reward and eliminate Baker from their land dispute. So, Monro broke into Baker's house with some of his "Yorkers" to grab Baker. A fight immediately ensued wounding Baker's wife and son, but they got Baker. When the Green Mountain Boys heard of it, they followed in quick pursuit, rescuing Baker and ruffing up Monro.

Yet, it wasn't over. Monro had kept Baker's gun. So, Seth Warner, future hero of the Battle of Bennington, and then a Green Mountain Boy, rode out to Shaftsbury Hollow to retrieve the gun. Monro refused, a fight ensured only ending when Warner drew his sword, struck Monro on the head and rode off.

Whatever happened to Monro is not known. But Warner got what he deserved for his attack. The Proprietors of the Bennington settlement granted him 100 acres of land for his "valor in cutting the head of Esquired Munro the Yorkite."

And next time:
How our own Captain David Galusha, fits into the very foundations of our present-day Shaftsbury.
Carl Korman
Shaftsbury Historical Society


Explore
Discover
Recreation
Farm to Table
Living
Want to Get Involved?
The Town currently has 3 vacancies at this time.
See Open Positions