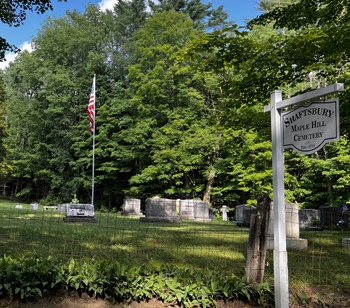 Stay informed and check the website often. We will place all the town news here.
Read more news...


SHAFTSBURY - A long-dormant community hub in Shaftsbury is poised for a revival. The new owner of the Shaftsbury Country Store & Cafe property on Route 7A - Lilli West Williams - said it has been a dream of hers to own a store with a coffee and sandwich shop, and her hope is to open one at the landmark business site by summer.

As the owner of Maple Leaf Realty, West Williams had been marketing the village store, a fixture in Shaftsbury for decades before it closed about six years ago. The more she thought about it, though, the more she liked the idea of owning it.

"I had it listed for several months, and I kind of joked with people that, the more that I try to sell it, I think maybe I should buy this," she said. "Well, so I sold it to myself."

The building also "has two beautiful apartments that are both three-bedroom apartments, and they're really nice and they pay the mortgage and the expenses," she said. "So I thought, if the store just kind of paid for itself, it would be a good thing."

She added, "The community has felt kind of empty without it. It needs that little hub there."

STRONG REACTION
Now, West Williams and her husband, Michael Williams, do indeed own the property, and they intend to reopen it as a store while also serving food.

She said she was a impressed by the reaction from townspeople, who seemed to light up upon hearing the news.

"I was just surprised," she said. "Everybody that I mentioned it to has been like you just told them they won the lottery."

Town Clerk Marlene Hall agreed. "I share the excitement with everybody in town," she said. "I grew up in Shaftsbury, so I remember going to the store as a kid. It has had several owners over the years, but it just doesn't seem the same without the store open in town."

Hall added, "I wish them a lot of luck. I think she is awesome, and I think they are going to do a great job with it."

"Everybody is very happy," said Assistant Town Clerk Gina Jenks. "It is a very big part of Shaftsbury."

FILLING A GAP
West Williams said that "there is really nowhere you can go and sit down, and have a sandwich and have a coffee between Arlington and Bennington. You can get a snack, but there is nowhere to sit down, or meet up with somebody."

She and her husband plan a "classic country store, and we're going to have a specialty, like a hot-plate special."

Of her husband's ideas for the store, she said he's "excited about the potential for a butcher shop, like his uncle had, and he's been working on that idea. He loves dogs, so there will definitely be some dog supplies, too."

FAMILY CONNECTIONS
While West Williams will continue selling real estate full time, and her husband is a contractor who also maintains properties for Maple Leaf Realty, the couple will get some help from his mother, Marlene Knapp Camp, who will be returning to the area "to help get it up and running."

Marlene's mother, Pauline Knapp, a former Shaftsbury town clerk, is a sister of the late Martin "Marty" Harrington, who with his wife, Millie, operated the store and a butcher shop at the site from the 1960s to the 1980s, West Williams said.

She said Marlene remembers spending time at "her aunt and uncle's store. She was there a lot as a kid."

The most recent store operation opened in 2016 but closed several months later. Before that, the store had been closed since 2014. The building itself dates back to the early 20th century.

"Real estate is my main thing," West Williams said, "but honestly I have dreamed of having a coffee-shop-community- kind-of-place for people to feel good when they come in since I was like 18 years old. So this... was kind of a dream and tying it in with the country store that my husband's family [was involved in]. That's just a neat way to bring two of our things together."

She added, "It really doesn't need a whole lot, you know; some cleaning and some paint. We've got to get some equipment up and running, and we've got to stock it and get all our permitting in place... It's going to take a few months, but hopefully we will be open by the summertime; that's the plan."